skip to main | skip to sidebar

Yesterday I met the family for a wonderful evening at Misquamicut State Beach in Rhode Island. The surf was too rough for me to jump all the way in, but I enjoyed running around in the waves with my grand nephew. The water was warmer than the air! It felt wonderful.

Today I went out for another lunch walk.  Yes, my young Cooper's hawks are definitely gone. I did get to walk for a short while with a lovely eastern tiger swallowtail just slightly ahead of me. 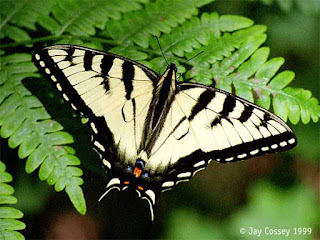 My walking partner was golden yellow!  Such a lovely creature. Thank you for walking with me.
Posted by Pat at 11:06 AM No comments:

It's time to start keeping this blog again. My theme will be yoga as in the past, but I'm adding lunch walks.  Just to keep me motivated, nothing fancy just fun and fitness.

On Monday while walking I was rewarded with the sight of two juvenile hawks.  You could tell they were juvies by their behavior - it seemed as if they were recently fledged nest siblings.  They were hawk playing, sort of playing tag across the street and into the woods on either side, and calling out to each other.  It wasn't an adult hawk cry, the piercing "kriyeee!" sound.  It sounded baby-ish in a hawk way. So I went to my trusted Cornell website, allaboutbirds.org and discovered they are juvenile Cooper's hawks.  Sure enough, the "food delivery to nest" sound was the call they were making.  "Where's Mama with lunch?" Have a listen: Click food delivery to nest

On Tuesday I was feeling Ga-RRRRRRREAT! from the very barre-ish Classical Stretch episode I'd done that morning - from Season 10, Episode 1007, "Power Up Your Legs." Had a real bounce in my step, back feeling good, practically dancing along! I got to the same spot and heard the food delivery to nest calls and sure enough, there were the young Cooper's hawks - joined by a third! What a display they put on, two deeper in the woods and vocalizing to each other while the third flew across the street to a tree branch where I had a great view. He sat and preened. I ran to the little island in front of the guard shack on Pequot Trail near the Mashantucket Pequot Museum and observed. Camera? Nope. :(

Wednesday, not feeling quite as good. Legs actually sore from Miranda's tai chi plies. But, camera in hand I ventured out. No sign of the Cooper's hawks - they are fully fledged and have gone out to fend for themselves in the woods of southeastern Connecticut. I wish them well, and thank them for the adventures. 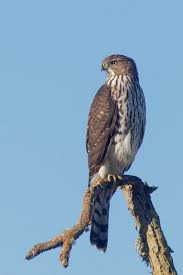 Note the long tail, a Cooper's hawk trademark. They are smaller than red tailed hawks - a little larger than a crow. 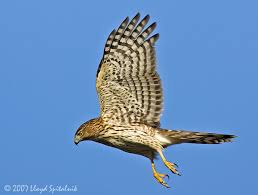 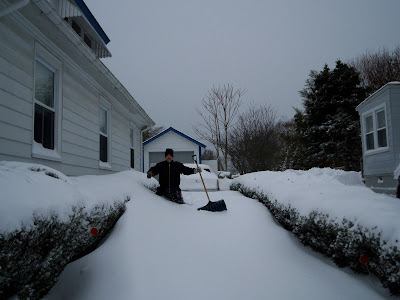 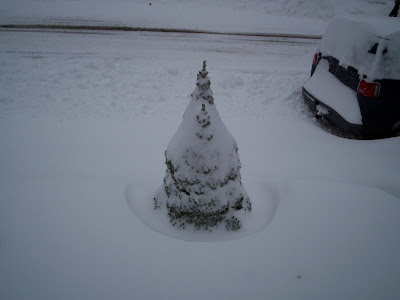 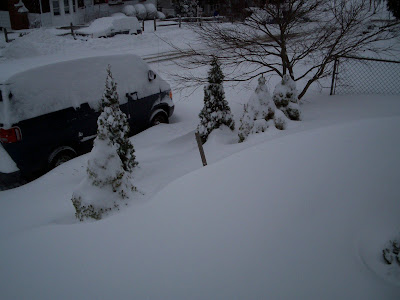 My friend Maddy Avena used the term "wring out the old and ring in the new," which I think is delightful. On this snow storm day in my little New England home, I used the found free time to program and follow a 140 minute practice using Shiva Rea's media. Shiva is my favorite yogini, I find her practices to have a range from healing to challenging, her fluid approach is a salve to stiff joints and clogged emotions, and her DVD media is
visually beautiful. All of her A/V media is backed up with glorious soundtracks.

My close of 2008 practice consisted of:

Reflections on my Yogic Journey in 2008, among other things. On 12/31/07 I was beginning the exploration into my first Svadyaya (self discovery) through a 40 Sadhana (practice - path toward goal). An online mentor loaned me a book that had been in her family for years - it was her parents' volume, in fact. Iyengar: His Life and Works was an eye opener for me not only on BKS Iyengar but on yoga in general, and the connections between yoga and Ayurveda through the book's little primer written by BKS' sister, Geeta. This kind mentor also turned me on to John Friend and Anusara yoga which has been a big help.
One of the portions of the book discussed Iyengar working with people with arthritis, including a case study of a man who used daily practices to literally break through his "calcifications." Hey - it can work. I embarked on this first Svadyaya/Sadhana with great hope and confidence. At midnight on 12/31/07 - 01/01/08, I went outside and walked through the neighborhood, thinking of all kinds of new possibilities in store. I'd joined a yoga studio and the owner was telling us that the numbers were lined up for a year of sweeping global change. I didn't stop to think that the global change could maybe not be for the better. Or maybe, it is the end of old ways going down kicking and screaming? New Year's Day 2008 found me at an intention setting ceremony in that yoga studio, which was enjoyable and seeded me with high hopes and a long list of goals. I walked out on a bliss cloud, visualizing good health and fortune, and ended up getting almost immediately sick. That rebounded and rebounded until it ended up as pneumonia and lingering chest pain; I whacked out my hip hiking; my chronic condition came out of remission; husband lost his job; now mine could go any day. But amazingly through it all I kept up a steady yoga practice and I don't know if it's the yoga, but usually these types of situations would have me a hysterical wreck. I seem to be handling it better.
2008 wasn't all doom and gloom, I'd reached a point of having great success with asana and freeing up a lot of stuck and stiff spots - after this flare calms down, I'm looking forward to getting back to that place. Breaking down those calcifications again. I'm going back to the studio's intention ceremony tomorrow but leaving my rose tinted spectacles home. I won't view the practices with cynicism; rather through a humbled viewpoint. My simple intention is to keep practicing yoga and expanding on what I learn, and hope that each little lesson can carry me through another day making the best of it that I can.
Happy New Year! I know a lot of us have experienced setbacks in 2008 - illnesses, financial woes, loss of loved ones, careers, life upheavals. It seems there was more than the usual bad fortune going around. I hope all of you have a good year ahead. We can hope! Namaste - may peace shine down upon us.
Posted by Pat at 1:59 PM No comments:

Just some notes to capture a most delicious Svaroopa pose I learned tonight. Virasana, or Hero's Pose, done Svaroopa style. This should be performed after some preliminary poses, particularly a tailbone opener and a lunge set. We did it tonight after chin tuck (hands clasped behind head, elbows toward ceiling (hugging in), slowly and gently lifting the head with the strength of the arms alone, holding and breathing a few times, then slowly lowering and extending vertebrae by vertebrae. Next we did Tortoise for tailbone on the seated stack (remember narrow block between thighs to press hands into), Baddha Konasana on the stack, and a Lunge (right leg first).

To perform the pose:

Donna said you can also perform a twist in this pose for a deep SI joint release - she would not divulge any information but I can experiment and see what feels right. After that we did another lunge (left first), revisited the chin tuck, and closed with Rotated Stomach, Savasana and of course, Yoga Mudra to seal. Nice practice! 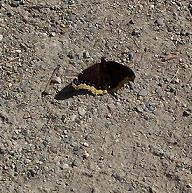 BLUFF POINT STATE PARK - SEPT. 23 2008
That is a black butterfly with torqoise spots 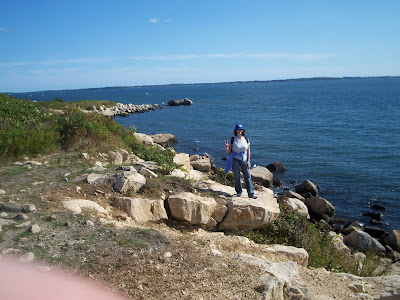 My boobs look big with a backpack on - I'm not arguing. 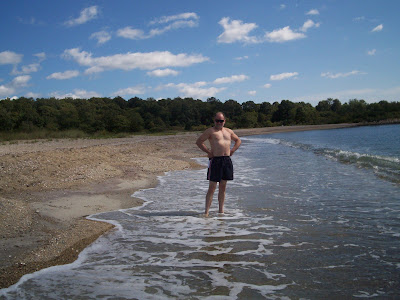 
There is an osprey up there - a huge one, had black and white patterns under his soaring wings. 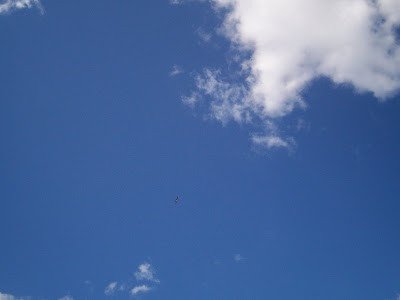 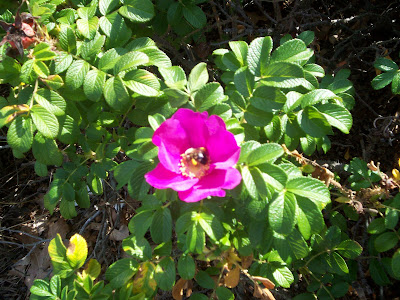 Beach roses - a beach rose with a beach bee in it - see they even have rose hips - growing out of rocks, sand and shells, amazing! 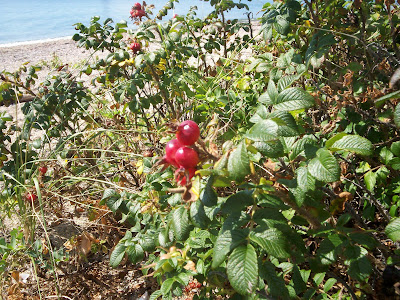 Thank you Rachel Carson - for alerting us and gathering advocates for tidal salt ponds and marshes. These "wetlands" (formerly known as swamps) act as "horizontal levees" so ocean tides have room to breath, storms can swell and surge without too much detriment to humankind, and multiple flora and fauna can flourish. 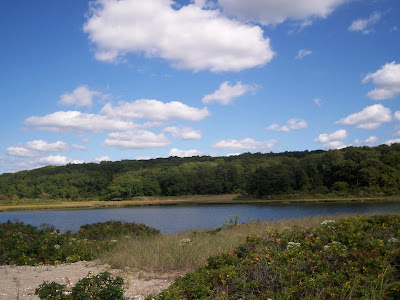 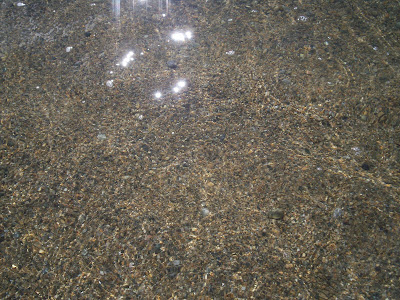 The "sand" is comprised of small beach-washed pebbles and tons of bivalve shells we called "Old Man's Toenails" - we had to wear flipflops to wade in the gentle surf. 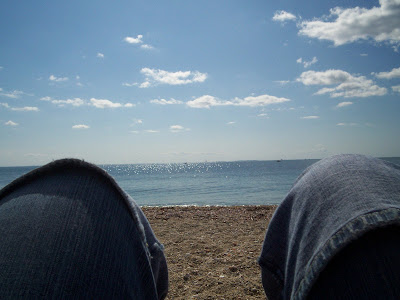 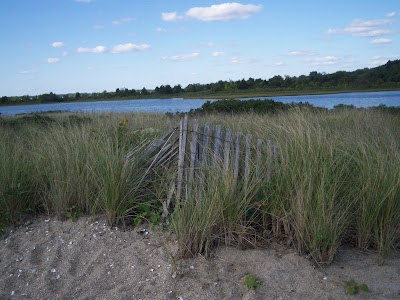 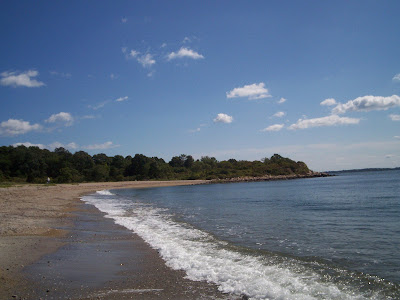 Funny how bad things can turn good. A screwed up economy and a bill from your homeowner's insurance for "hazard insurance underpayment" can suddenly turn a planned vacation to Massachusetts into a "Stay-Cation" right at home in SE Connecticut.


Fortunately, SE CT is a gem of the North Atlantic Coast and us two hard working souls have barely had time to explore it - and WHAT HAVE WE BEEN MISSING!!!???? Let's see if this old fart can upload photos with text included ... probably not.

This is a Flickr badge showing items in a set called Mushrooms at Mashantucket 08-21-2008. Make your own badge here. 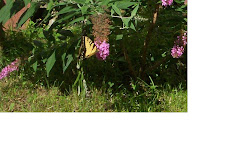 Eastern Tiger on my butterfly bush Pat
How do I define myself? As Jimi Hendrix sang, "Have you ever been experienced? Well, I have" As in 50 years of seeking beauty in every day, through nature, Yoga, movement, and laughter; music, smiles, and family. Married 30 years Son Alex is my shining star I love water and live by the sea